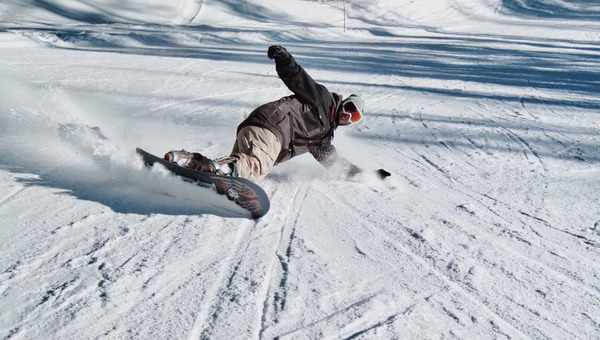 Alpine snowboarding is a discipline within the sport of snowboarding. It is practiced on groomed pistes. It has been an Olympic event since 1998.

Sometimes called freecarving, this takes place on hard packed snow or groomed runs and focuses on carving linked turns, much like surfing or longboarding. Little or no jumping takes place in this discipline. Alpine Snowboarding consists of a small portion of the general snowboard population, that has a well connected social community and its own specific board manufacturers. Alpine Snowboard equipment is a ski-like hardshell boot and plate binding system with a true directional snowboard that is stiffer and narrower to manage linking turns with greater forces and speed. Shaped skis can thank these "freecarve" snowboards for the cutting-edge technology leading to their creation. A skilled alpine snowboarder can link numerous turns into a run placing their body very close to the ground each turn, similar to a motocross turn or waterski carve. Depending on factors including stiffness, turning radius and personality this can be done slowly or fast. Carvers make perfect half-circles out of each turn, changing edges when the snowboard is perpendicular to the fall line and starting every turn on the downhill edge. Carving on a snowboard is like riding a roller coaster because the board will lock into a turning radius and provide what feels like multiple Gs of acceleration.